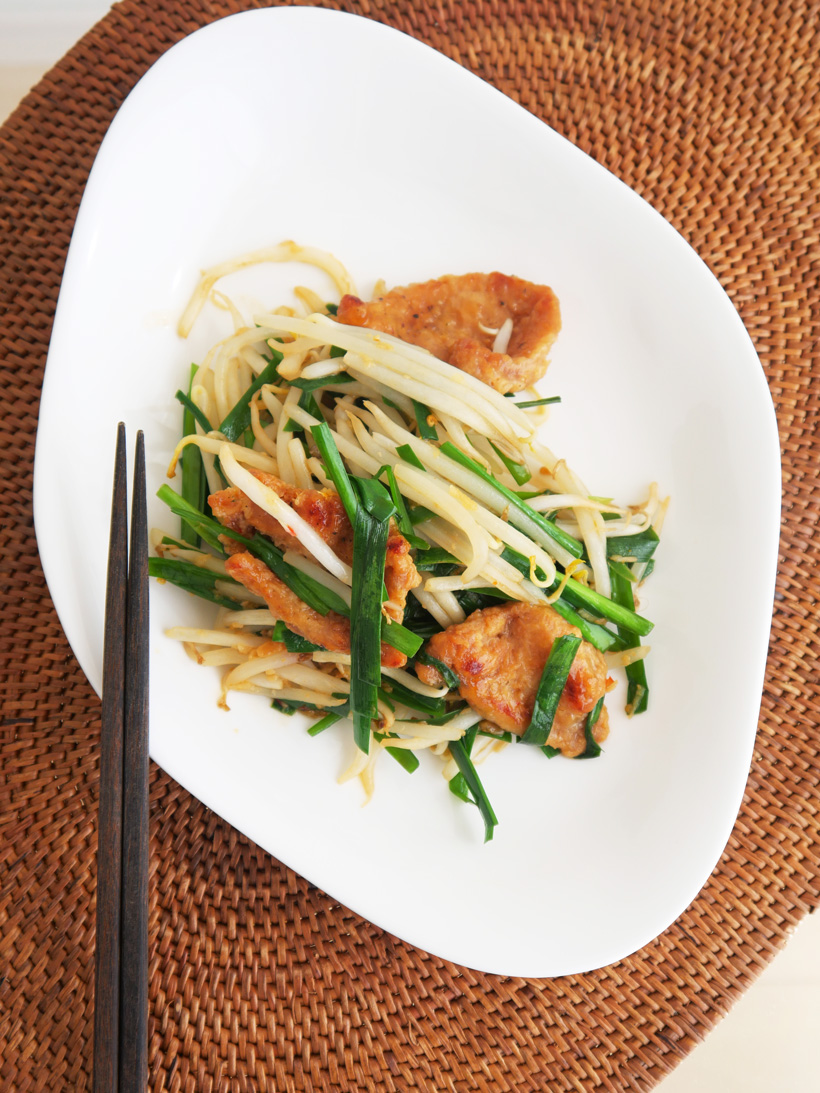 Delicious Chinese vegan stir-fry dish that you can also make with any vegetable and/or meat substitute of your choice!

This Chinese stir-fry using liver and Chinese chives or what we call Rebanira-itame (レバニラ炒め) is widely popular among the Japanese and can be found at any local Chinese restaurant in Japan. It’s known as a “stamina” dish because of the iron contained in liver and vitamin B1 and B2 contained in Chinese chives, and a lot of people eat it when they are feeling a bit low in energy especially during hot summer (like… just about now!!!).

That being said, because of the distinct smell and taste of liver, the dish is not everyone’s cup of tea. AND liver is of course, not for vegans:) So, I decided to make a version of this dish using soy meat (which also contains a lot of iron!).

I’ve only started cooking with “soy” meat recently and am still experimenting different ways to cook it. I’ve found that it works really well with oil like stir-fry and deep-fry, but it’s important to prep it right. 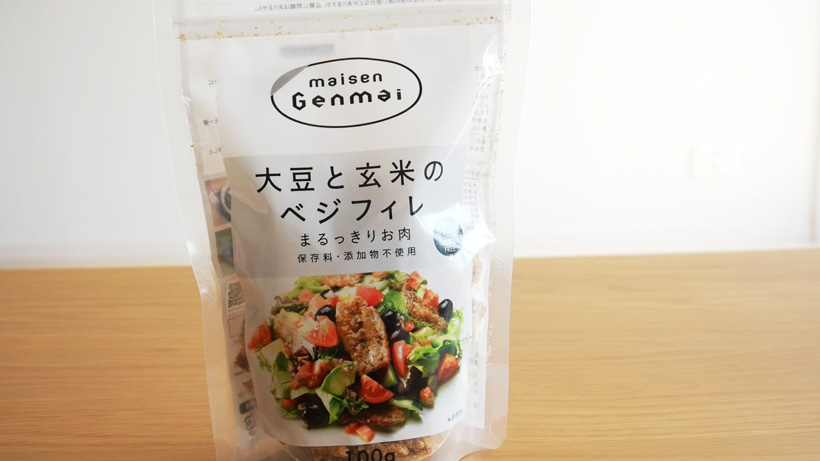 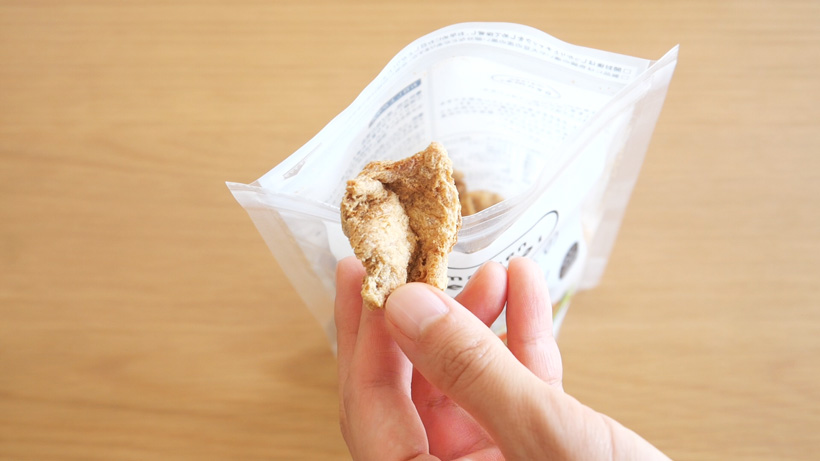 Dry soy meat comes in dry form and needs to be “softened” before cooking. You could soak it in hot water for 10-20 min, but I’ve found that it’s better to cook it in boiling water for about 3 min. Cooking in boiling water will make the texture softer (you may or may not like that depending on the dish you are making) but it helps to remove the “bean” smell. 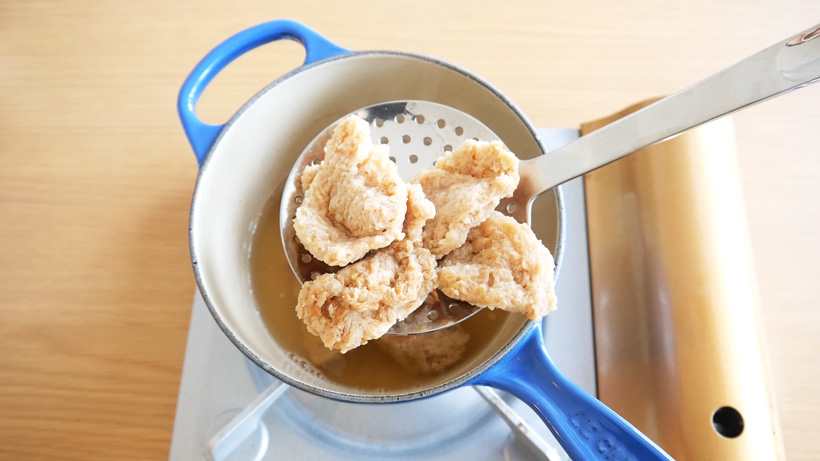 As the soy meat itself doesn’t have much taste, it’s important to marinate it beforehand if you are frying or deep frying it (as opposed to putting it in soup, for instance). For today’s stir-fry, I’m marinating it with grated garlic and ginger, soy sauce and cooking wine (sake). Massage the soy meat gently in marinade to make sure all sides are coated and leave it in the fridge for 20 min or longer. 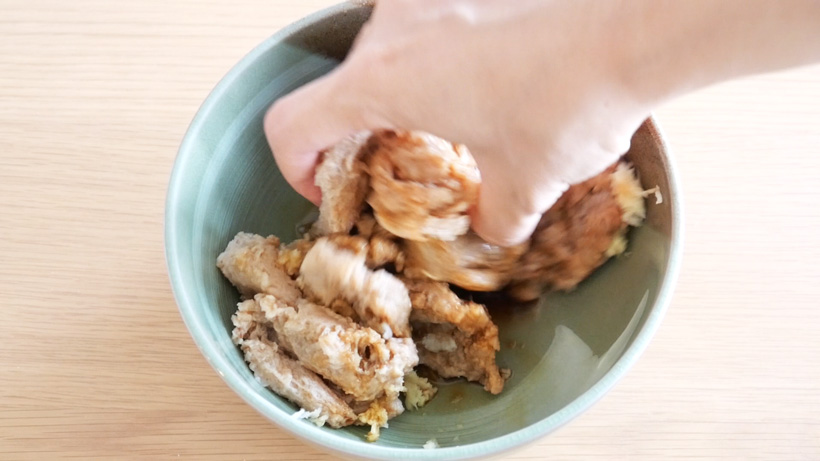 When I first learned to make stir-fry, I was taught to prep and get everything ready in front of me before I start stir-frying. This is because stir-frying is a fast and delicate process, so if you are chopping up some vegetables or mixing sauces as you go, chances are, whatever that’s in the pan will get burnt or overcooked and soggy.

So, first thing is, wash, drain and cut the vegetables. For today, Chinese chives should be cut in about the same length as the bean sprouts. If you’ve never tried Chinese chives, it’s got this garlicy smell so if you are not too sure about it, you can also use spinach.

Then, the second thing is, prepare herbs and sauces in the order that it goes in. For today, put grated garlic and ginger and chili bean paste in one dish, and a mixture of vegan “oyster” sauce, cooking wine, shoyu-koji (or soy sauce, if you don’t have shoyu-koji) and sugar (only if you are using soy sauce since shoyu-koji itself has sweetness) in another dish. 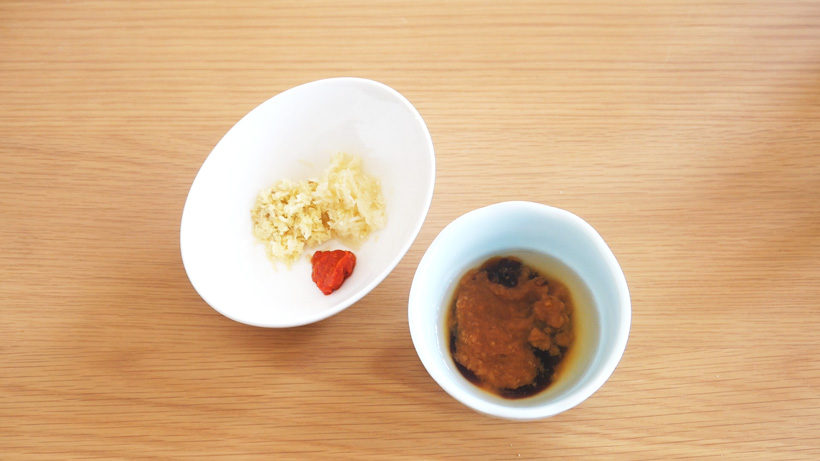 Finally, squeeze extra liquid out of soy meat and coat it with some starch. Starch will form nice crust when fried with oil and lock all the juice inside. 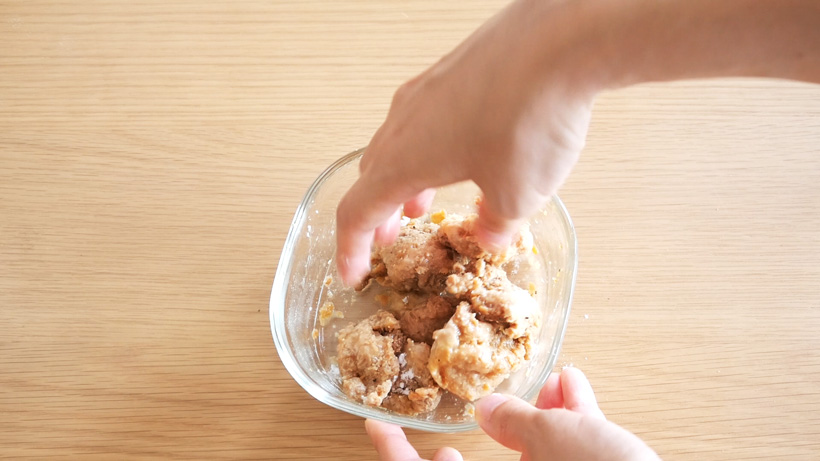 Now, we are ready to stir-fry! Heat some oil in the pan (I’m using rice bran oil, but you can use olive or canola oil – don’t use sesame oil as its flavor will overpower other ingredients) and start with soy meat. Brown both sides. 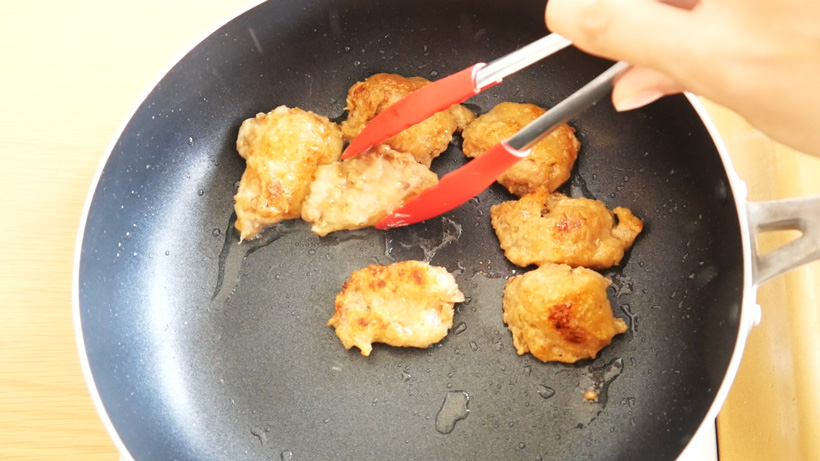 Add grated garlic and ginger and chili bean paste. Let the mixture soak in some oil and immediately add vegetables (Chinese chives and bean sprouts). If you heat the chili too much, it will get diffused in the air and make you cough and choke, so be careful! 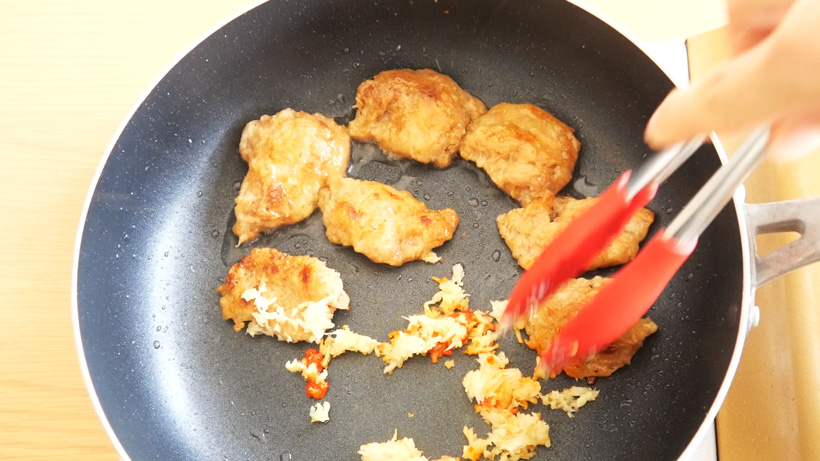 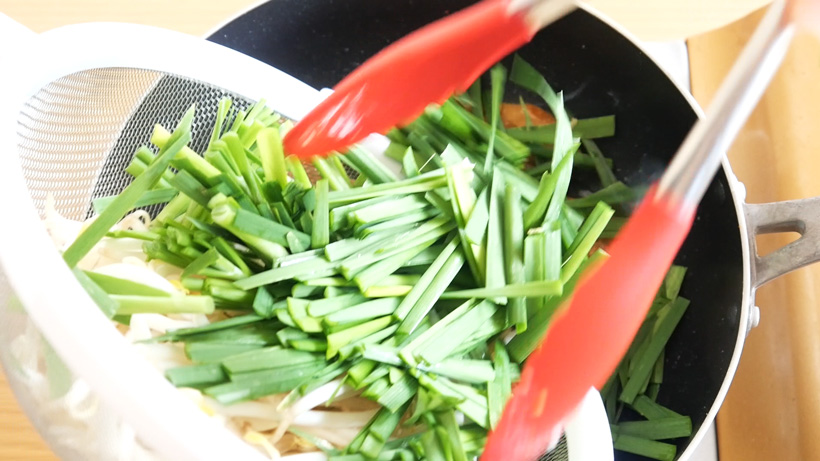 Stir-fry well until the vegetables are nearly cooked. 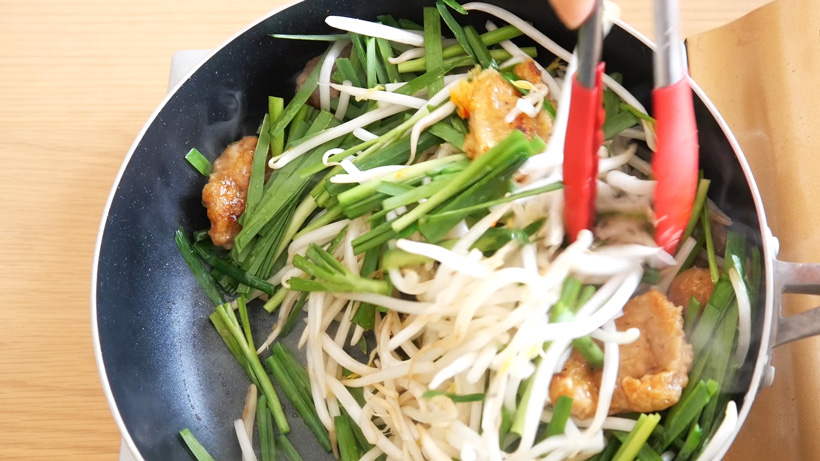 Make a small “well” in the middle and pour the sauce mixture in. 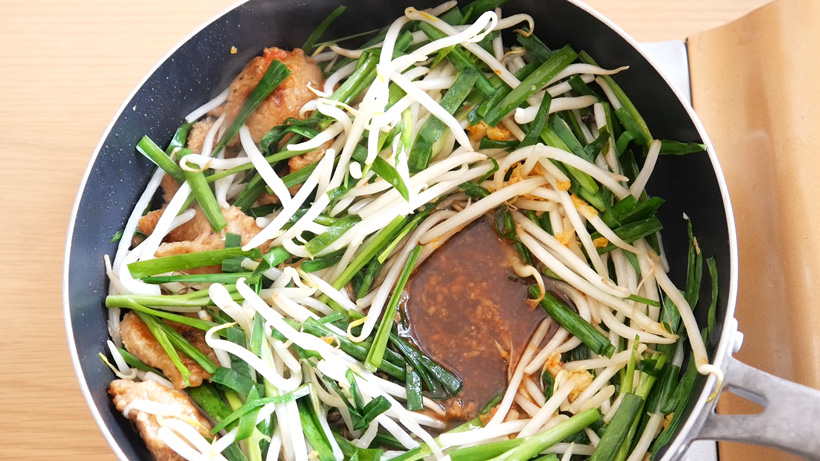 Once the sauce starts to produce really nice smell, stir well to coat everything with the sauce. 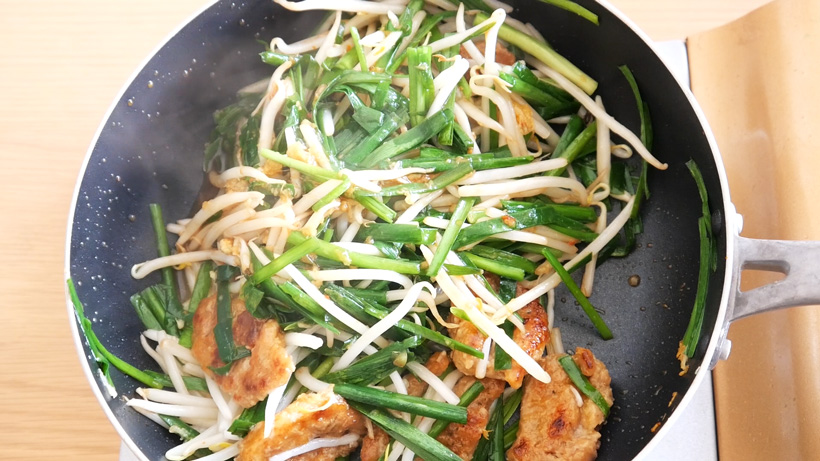 Serve it hot with some rice! 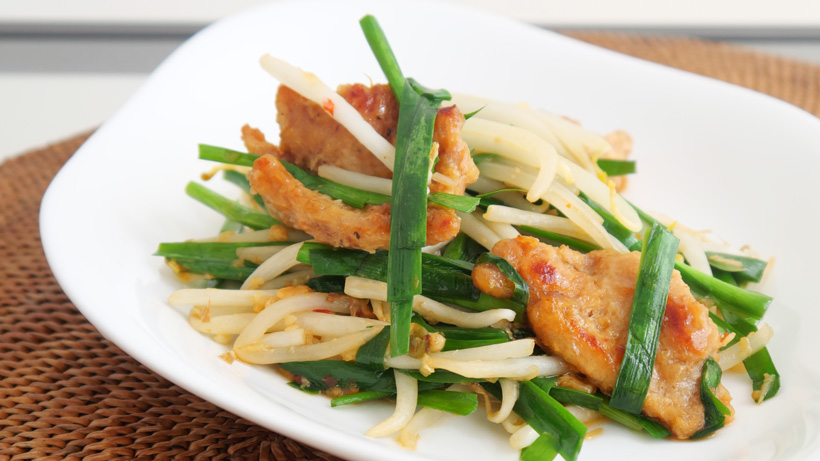 If you follow the steps and use the same sauce, you can actually create delicious stir-fry with any vegetable of your choice, such as broccoli, peppers, pak choi/bok choy, cabbage, etc. etc. Enjoy! 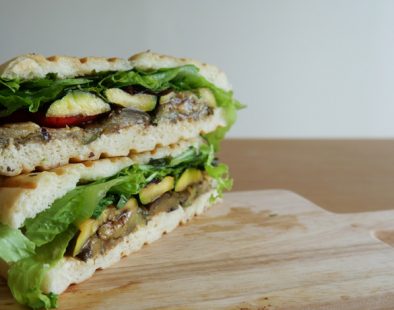 If you have homemade vegan mayonnaise in your fridge, you have to try making this panini with grilled summer vegetables! 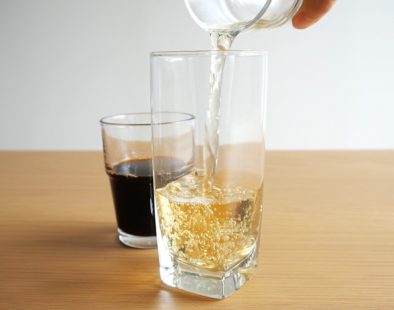 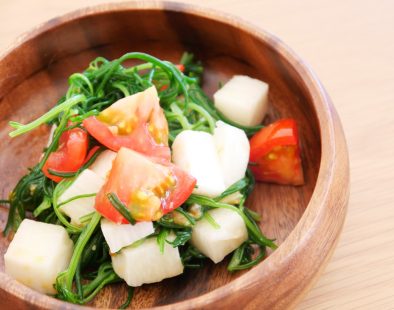