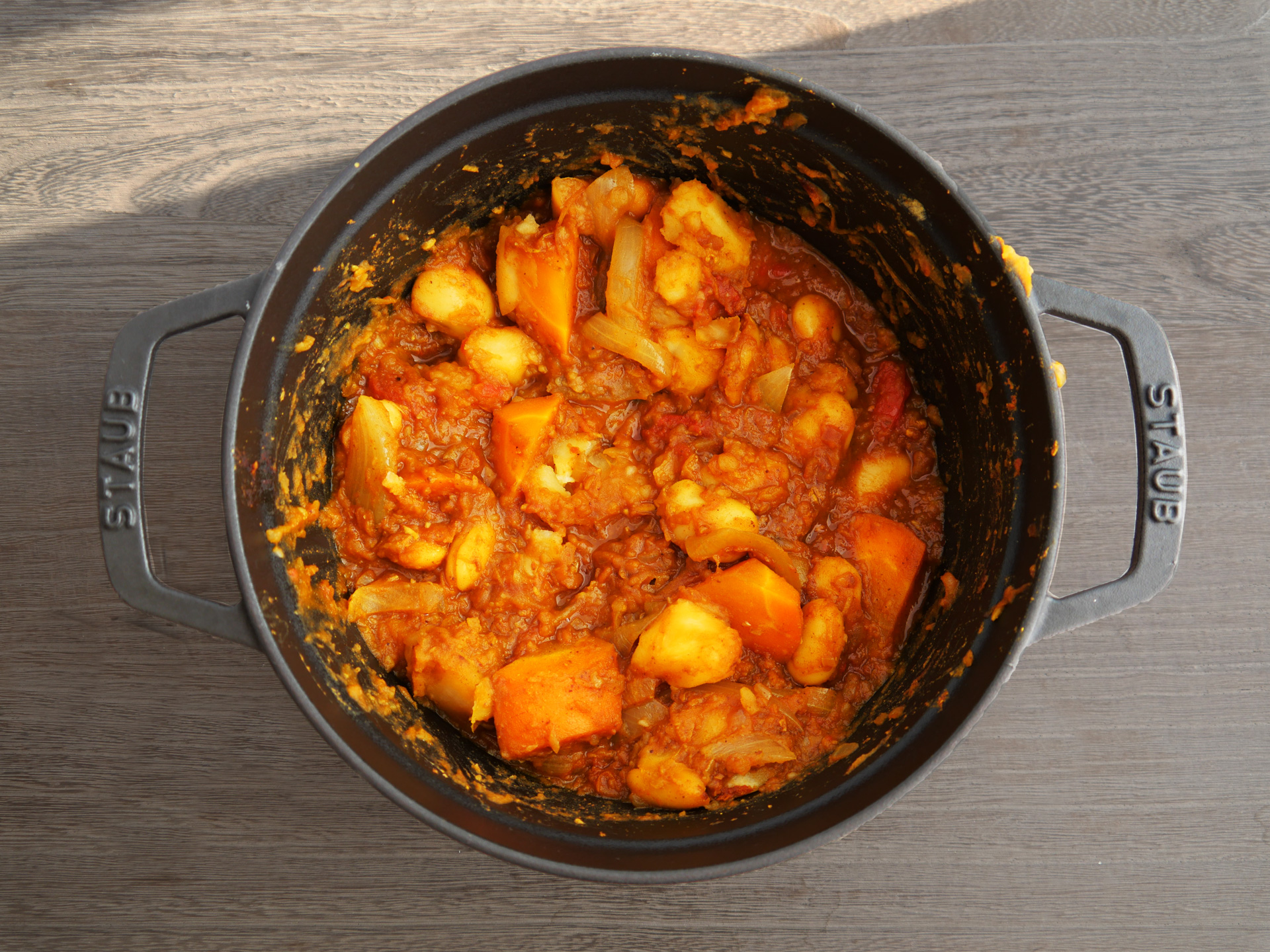 Curry, needless to say, is originally from India, but it has taken such deep roots in Japan that it’s ranked as one of the most popular foods among the Japanese. One thing that distinguishes Japanese curry from other curries in the world, I think, is the thickness of the gravy. Because Japanese curry is almost always served with Japanese rice and we like our rice to be nice and sticky, it’s made thick to not to make the rice soggy.

So how do Japanese make curry? I remember when I was living in India, I invited some Indian friends over and cooked Japanese curry for them. They were very impressed and wanted to know what spices I was using to make it, but I had to tell them that I had no idea because… When we make curry, we almost always buy ready-made curry paste blocks called “curry roux.” So all we have to do is, cook some vegetables and meat with water and melt those blocks in. That’s it! So easy! And any supermarket would have an entire shelf dedicated to offer different kinds of curry paste blocks.

The problem with those blocks for me is, besides spices, they contain all sorts of preservatives along with essence from beef and/or pork. Also, the blocks are called “roux” for a reason, because they contain a good amount of flour and fat, which makes the sauce so thick, so easily.

Luckily, making thick and tasty Japanese curry from scratch is not hard at all! Ingredients used are super simple also:) 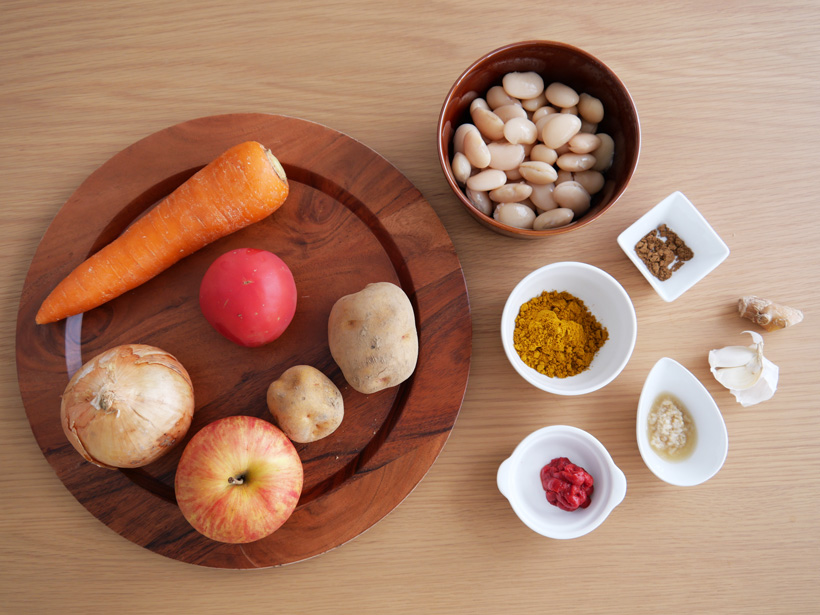 For today’s curry, I’m using white Japanese beans (白花豆 or shirohanamame) from Hokkaido. They are very similar to great northern beans (but bigger?) and have a very nutty flavor perfect for curry.

Soak the beans in water overnight and cook in a pot or pressure cooker until soft. 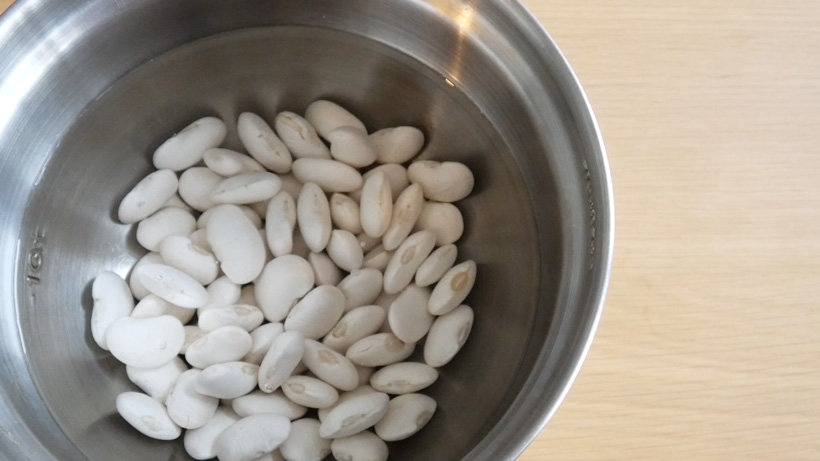 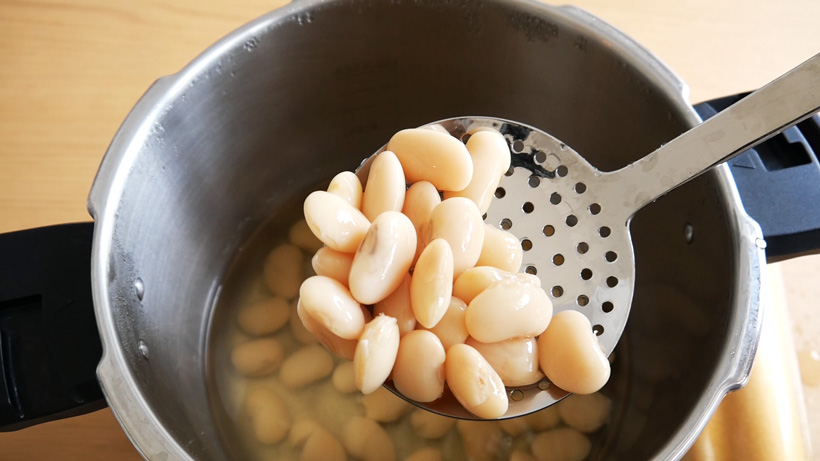 Take 1 onion. Finely chop half and cut the other half in thick slices. 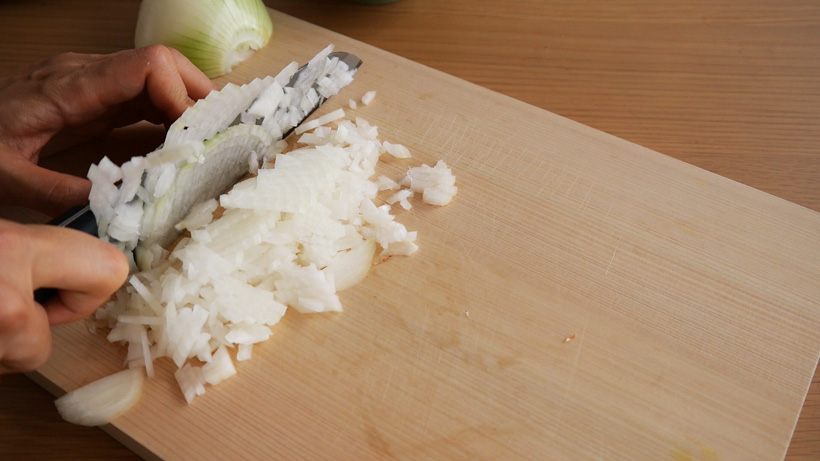 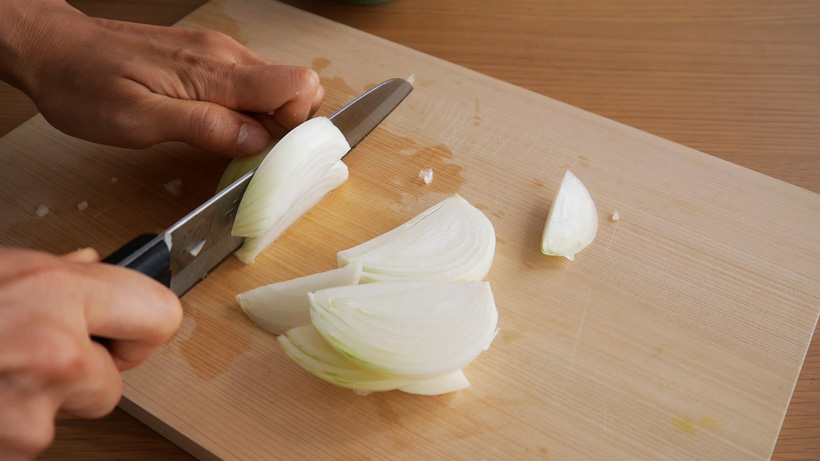 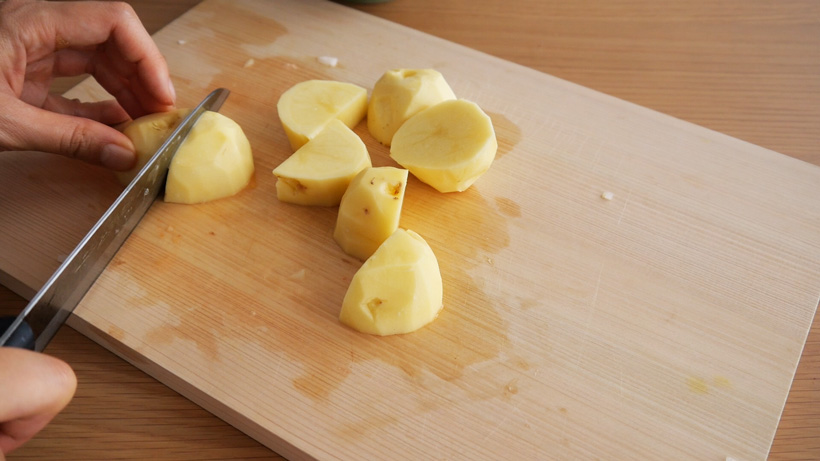 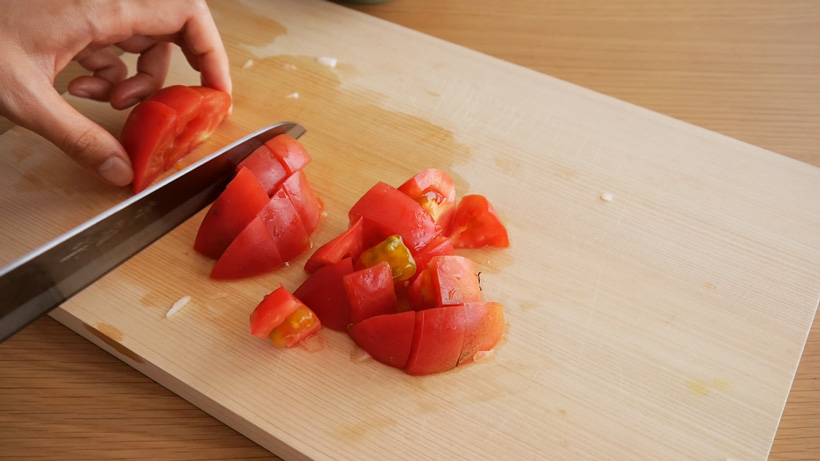 Take 1 carrot. Roughly chop half and grind the other half. Grind 1/4 apple and combine with ground carrot. 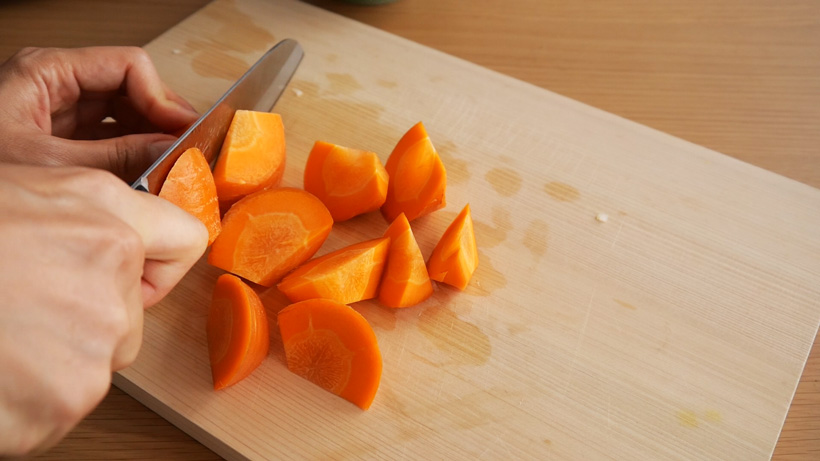 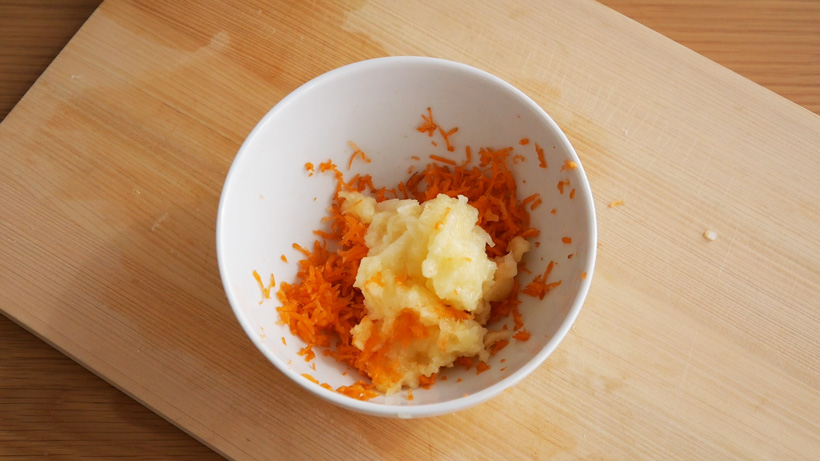 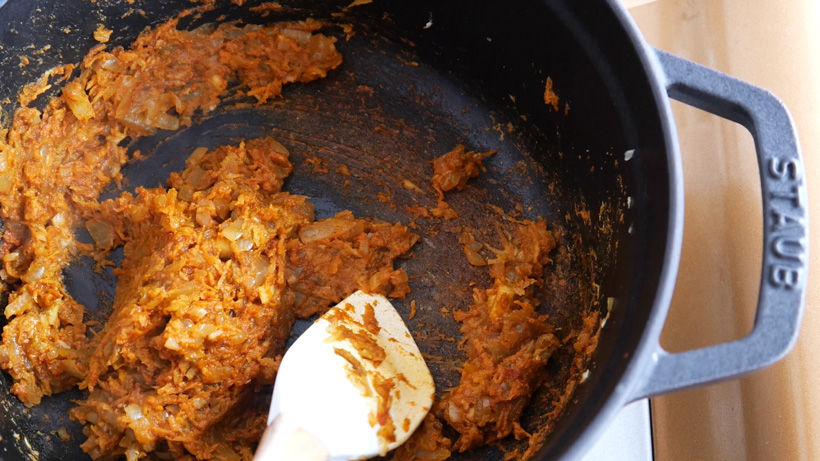 Once the mixture becomes paste-like, add the rest of the vegetables (onion, carrot, potatoes, tomato and beans). Stir and close the lid. Cook on low heat for 20 min. 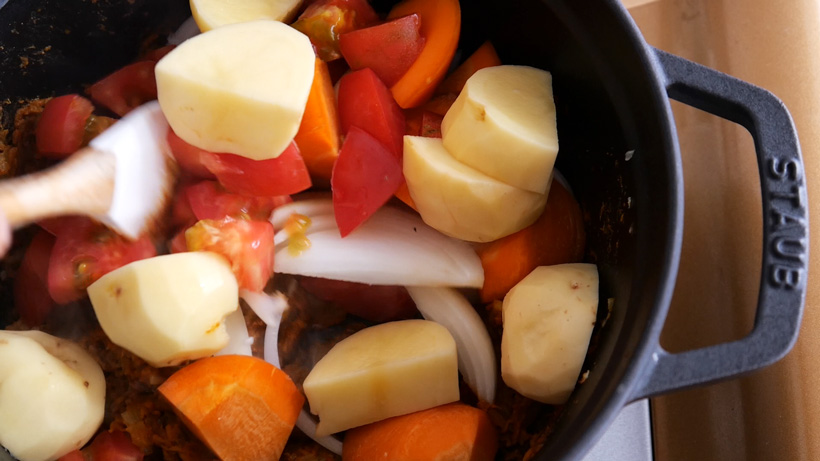 After 20 min! Vegetables have been cooked with the very moisture they released. 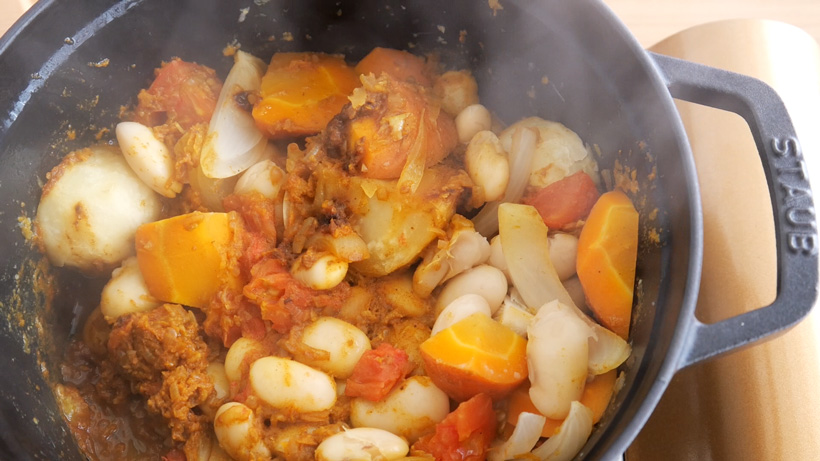 Add just enough veg broth for desired consistency and stir. If you like your curry to be thick, you can add just a little bit of broth and if you like it thinner, you add more. Add salt to taste. 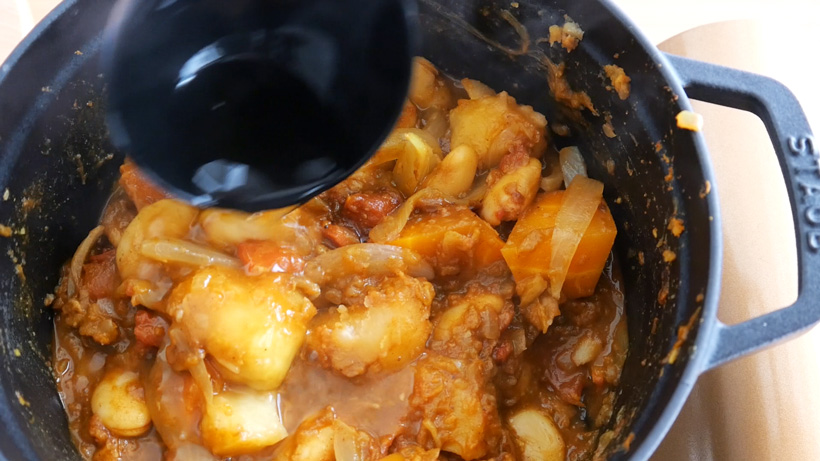 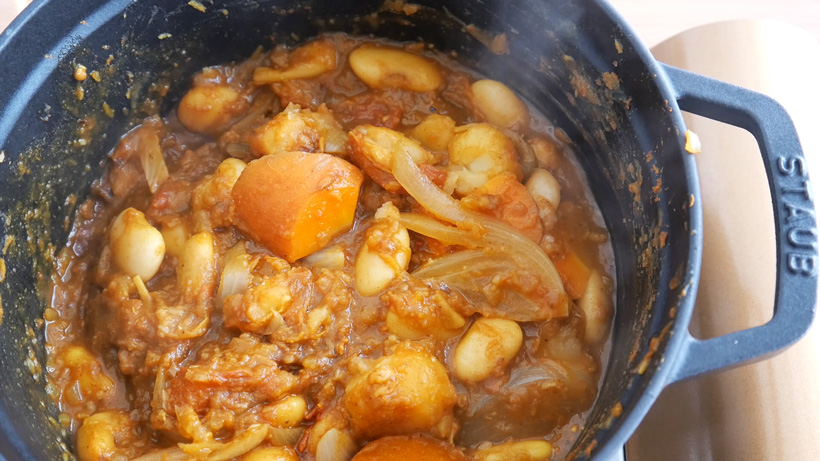 In this recipe, the thickness of the sauce comes from the vegetables themselves, so there is no need to use flour or excess fat. It’s a very simple recipe, but it’s healthy and tastes so rich and delicious! 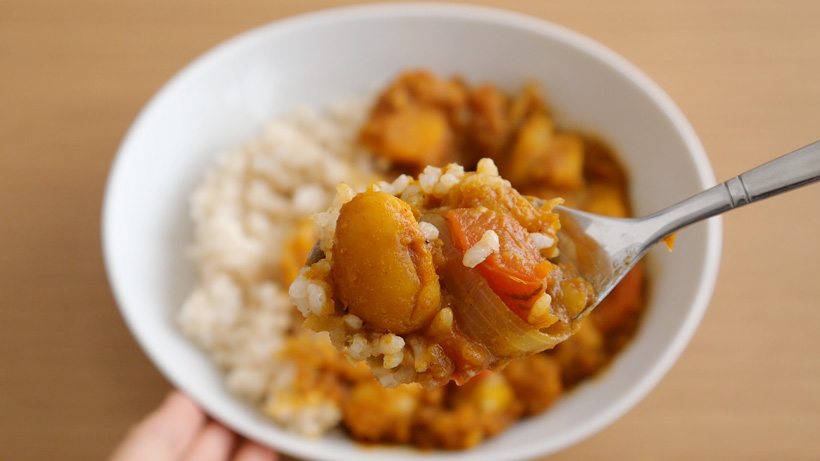 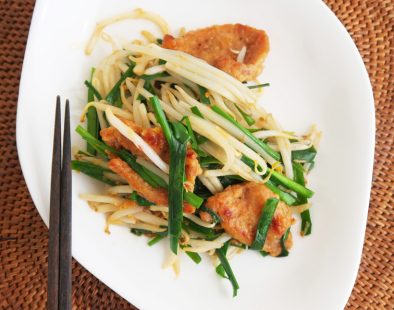 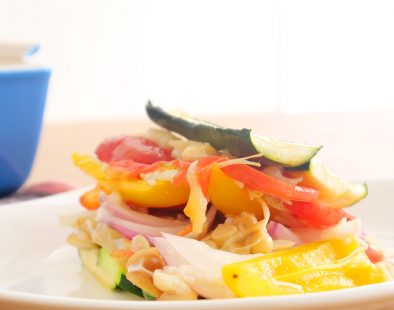 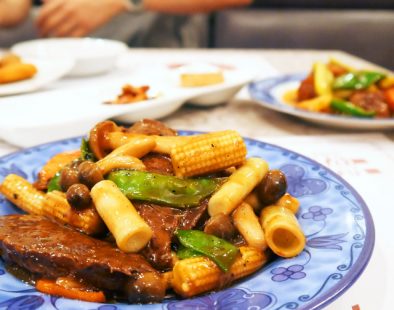